In addition to being On Location at natural disasters and other tragedies through their MFI Media Support Team, this article explains how MFI began.

Reaching media and entertainment professionals worldwide for Christ.
How Mickey Rooney and Johnny Carson inspired a Lutheran country pastor to reach out to the entertainment community in Hollywood.

BEVERLY HILLS, CA (ANS) — Bob Rieth is a quietly-spoken man, beloved by many in the Hollywood community, but he seems the most unlikely person to become a confidant to so many in the entertainment capitol of the world. 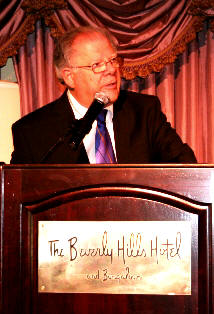 And now, this gentle man (in all senses of the word) has just put on his 12th Annual Media Fellowship International (MFI) Annual Praise Brunch at the historic Beverly Hills Hotel in Beverly Hills, California, which was attended on Saturday, September 25, 2010, by hundreds who make up a Who’s Who of Hollywood’s Community.

The speaker was the giant figure of Roosevelt “Rosey” Grier – he’s 6’ 5” in tall — who is an American Grid Iron Football legend, actor, singer, writer, minister, political activist, who shared his personal testimony of how he found Christ and this brought about reconciliation with his wife, Margie, who he remarried after their divorce.

Grier’s has quite a story to tell, for after professional sports career, he worked as a bodyguard for Robert Kennedy during the 1968 presidential campaign and was guarding the senator’s wife, Ethel Kennedy, during the Robert F. Kennedy assassination. Although unable to prevent that killing, Grier took control of the gun and subdued the shooter, Sirhan Sirhan. 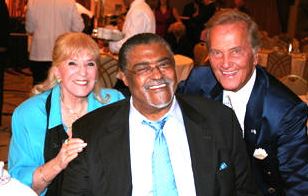 Also performing at this star-studded event on Saturday morning were Emcee, Doug Jones, who has appeared in over 75 films and TV shows over the past 24 years; Grammy award winning artists Marilyn McCoo and Billy Davis, Jr. and their Gospel group, Soldiers For The Second Coming, plus the renowned contemporary instrumental recording artist, Kevin Toney, an original member of The Blackbirds, who played some scintillating piano for the audience.

After the event, I sat down with Bob Rieth to learn more about how MFI began.

He explained, “I was in seminary in the fall of 1976 and my wife, Marion, and I was serving at a small church country church in the Pacific North West. In the morning I’d go to school, then in the afternoon I would make my calls and, in the evening, I’d do my studying.

But we would always quit at ten o’clock and at that time that’s when the Tonight Show with Johnny Carson came on TV, so we would usually sit together and watch him and his guests.

“Everyone was laughing, but in my heart I really felt the sadness of Mickey and Johnny and God began to work on me until I became so uncomfortable that I could hardly sit still. I got up and I paced the floor and, by the end of his interview, Mickey left. It was then that the question that came to my heart and my mind and I prayed, ‘Lord, why isn’t there someone there for him?’ And that really is where it all began.”

It wasn’t long after that that Rieth started Media Fellowship International which has now grown into a worldwide ministry. His “personal concern” and “unconditional love” for people “in all circumstances” has formed the basis for the attitude and direction of MFI and he says “above all else what is really important is each person’s personal relationship with Jesus Christ.”

Rieth’s website (www.mediafellowship.org) explains what his organization is all about, saying, “Media Fellowship International (MFI) is a Christian ministry that works primarily with leaders in the professional entertainment and media industries. MFI provides a peer group atmosphere in which members can confidentially share their concerns and experiences, talk about Christ, pray with each other and study the Bible together.

“Believers are encouraged to share Christ, uplift the family, advocate moral living and promote love for God and country in both their professional and personal lives. Christian leaders in media can have a positive influence on the media product. MFI represents over 3,000 media and entertainment professionals with chapters in over 35 cities in the U.S., Canada and Europe.

“MFI, incorporated by the state of California in 1987, is recognized as a non-profit 501 (c)(3) organization. As such contributions are fully tax deductible. MFI is funded by private contributions from individuals who believe in this vital ministry of reaching ‘to the media, through the media.’”

Contact us for opportunities to fellowship with other media and entertainment industry people!

If you'd like more information about MFI, or if you need counseling, please reach out to us. We're here for believers and non-believers alike.

MFI, incorporated by the state of California in 1987, is recognized as a non-profit 501 (c)(3) organization. As such contributions are fully tax deductible. MFI is funded by private contributions from individuals who believe in this vital ministry of reaching ‘to the media, through the media.' DONATE